We believe that LIGO has failed to make a convincing case for the detection of any gravitational wave event,” says Andrew Jackson, the group’s spokesperson. According to them, the breakthrough was nothing of the sort: it was all an illusion.

The big news of that first sighting broke on 11 February 2016. In a press conference, senior members of the collaboration announced that their detectors had picked up the signature of gravitational waves emitted as a pair of distant black holes spun into one another.

The misgivings of Jackson’s group, based at the Niels Bohr Institute in Copenhagen, Denmark, began with this press conference. The researchers were surprised at the confident language with which the discovery was proclaimed and decided to inspect things more closely.

Their claims are not vexatious, nor do they come from ill-informed troublemakers. Although the researchers don’t work on gravitational waves, they have expertise in signal analysis, and experience of working with large data sets such as the cosmic microwave background radiation, the afterglow of the big bang that is spread in a fine pattern across the sky. “These guys are credible scientists,” says Duncan Brown at Syracuse University in New York, a gravitational wave expert who recently left the LIGO collaboration. 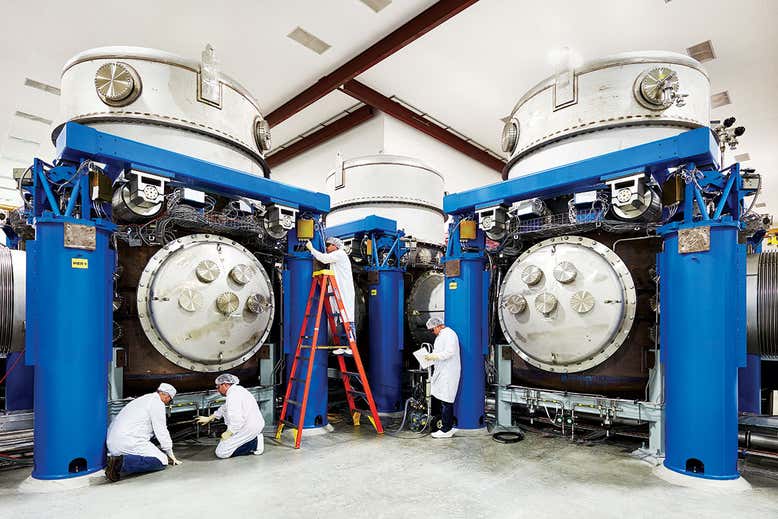 when Jackson and his team looked at the data from the first detection, their doubts grew. At first, Jackson printed out graphs of the two raw signals and held them to a window, one on top of the other. He thought there was some correlation between the two. He and his team later got hold of the underlying data the LIGO researchers had published and did a calculation. They checked and checked again. But still they found that the residual noise in the Hanford and Livingston detectors had characteristics in common. “We came to a conclusion that was very disturbing,” says Jackson. “They didn’t separate signal from noise. 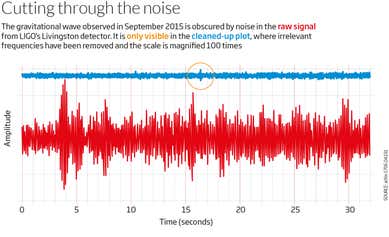 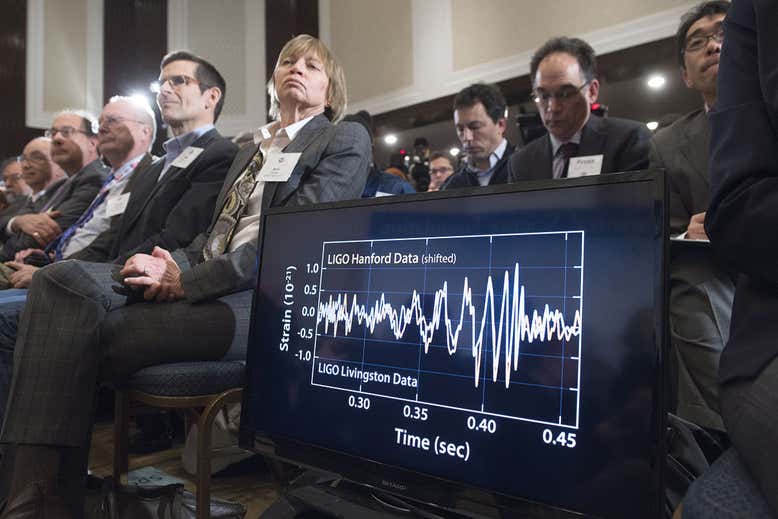 Jackson is suspicious of LIGO’s noise analysis. One of the problems is that there is no independent check on the collaboration’s results. That wasn’t so with the other standout physics discovery of recent years, the Higgs boson. The particle’s existence was confirmed by analysing multiple, well-controlled particle collisions in two different detectors at CERN near Geneva, Switzerland. Both detector teams kept their results from each other until the analysis was complete.

New Scientist has learned, for instance, that the collaboration decided to publish data plots that were not derived from actual analysis. The paper on the first detection in Physical Review Letters used a data plot that was more “illustrative” than precise, says Cornish. Some of the results presented in that paper were not found using analysis algorithms, but were done “by eye”.

Brown, part of the LIGO collaboration at the time, explains this as an attempt to provide a visual aid. “It was hand-tuned for pedagogical purposes.” He says he regrets that the figure wasn’t labelled to point this out.

This presentation of “hand-tuned” data in a peer-reviewed, scientific report like this is certainly unusual. New Scientist asked the editor who handled the paper, Robert Garisto, whether he was aware that the published data plots weren’t derived directly from LIGO’s data, but were “pedagogical” and done “by eye”, and whether the journal generally accepts illustrative figures. Garisto declined to comment.

There were also questionable shortcuts in the data LIGO released for public use. The collaboration approximated the subtraction of the Livingston signal from the Hanford one, leaving correlations in the data – the very correlations Jackson noticed. There is now a note on the data release web page stating that the publicly available waveform “was not tuned to precisely remove the signal”.

Whatever the shortcomings of the reporting and data release, Cornish insists that the actual analysis was done with processing tools that took years to develop and significant computing power to implement – and it worked perfectly.

However, anyone outside the collaboration has to take his word for that. “It’s problematic: there’s not enough data to do the analysis independently,” says Jackson. “It looks like they’re being open, without being open at all.”

Brown agrees there is a problem. “LIGO has taken great strides, and are moving towards open data and reproducible science,” he says. “But I don’t think they’re quite there yet.”

The Danish group’s independent checks, published in three peer-reviewed papers, found there was little evidence for the presence of gravitational waves in the September 2015 signal. On a scale from certain at 1 to definitely not there at 0, Jackson says the analysis puts the probability of the first detection being from an event involving black holes with the properties claimed by LIGO at 0.000004. That is roughly the same as the odds that your eventual cause of death will be a comet or asteroid strike – or, as Jackson puts it,”consistent with zero”. The probability of the signal being due to a merger of any sort of black holes is not huge either. Jackson and his colleagues calculate it as 0.008.

Getting an A+ on a Harvard PhD Final Exam

when it came to the first-year Macro final (I don’t mean the comprehensive exams), Andy Abel wrote a problem with dynamic programming, which was Andy’s main research area at the time.

Abhijit showed that the supposed correct answer was in fact wrong, that the equilibrium upon testing was degenerate, and he re-solved the problem correctly, finding some multiple equilibria if I recall correctly, all more than what Abel had seen and Abel wrote the problem.  Abhijit got an A+ (Abel, to his credit, was not shy about reporting this).

Esther Duflo and Abhijit Banerjee, MIT economists whose work has helped transform antipoverty research and relief efforts, have been named co-winners of the 2019 Sveriges Riksbank Prize in Economic Sciences in Memory of Alfred Nobel, along with another co-winner, Harvard University economist Michael Kremer.

Salam remains poorly known and largely unrecognized in Pakistan. The reason why, this film argues, was his religious beliefs. Most Pakistanis are Sunnis but Salam was an Ahmadi, part of a minor Islamic movement founded in the late 19th century by the religious leader Mirzā Ghulām Ahmad (1835–1908).

Such was the opposition in Pakistan to the Ahmadis that in 1974 the country’s parliament declared them non-Muslims – heretics essentially – and the constitution was altered to reflect that fact. Attacks on Ahmadis increased and, a decade later, Pakistan’s then president, General Zia-ul Haq, even barred members of the sect from calling themselves Muslims. They were also forbidden from professing their creed in public or even letting their places of worship be described as mosques.

the central message of this largely chronological account of Salam’s life is that Pakistan’s decision to effectively legislate against its own citizens and to outcast the Ahmadis profoundly affected him. As Salam wrote in his diary: “Declared non Muslim. Cannot cope.” Having previously been largely a “cultural Muslim”, Salam now saw his religious beliefs re-awakened.

The camera comes to rest on Salam’s name on the gravestone, above which is the epithet: “First ****** Nobel Laureate”. With a streak of white paint covering the offending word, what should be a cause for celebration – Salam’s status as a Muslim – has literally been airbrushed by someone from history. 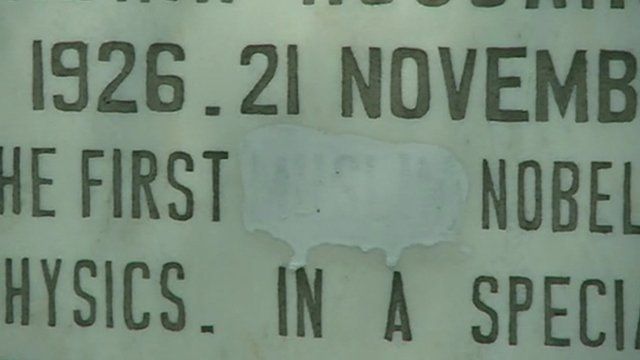 In economics, the University of Chicago holds the top spot with 32 laureates, followed by Harvard (30), MIT (28), Stanford (25), Berkeley (23), Yale (21), and Princeton (19). In terms of the graduate department awarding the PhD degree to economics Nobel laureates, about half have come from only five universities: MIT (11), Harvard (10), Chicago (9), Carnegie Mellon (4) and the London School of Economics (4). Six other universities have produced two each.

Robert Solow (Nobel 1987) published (in 1956) a formal model of economic growth in which the output to capital ratio was not fixed, and the growth rate of population (and consequently the labor force) drove economic growth. Technological progress entered the process via a specified steady rate of productivity growth. His first order differential equation explaining the rate of economic growth appealed to the mathematical formalism of economists (and has lasted as a staple for more than 50 years) because it is founded on notions essential to popular classical economic theories.

Won both the Nobel Prize and the Ig Nobel

Geim was awarded the 2010 Nobel Prize in Physics jointly with Konstantin Novoselov for his work on graphene.[21][22] He is Regius Professor of Physics and Royal Society Research Professor at the Manchester Centre for Mesoscience and Nanotechnology

In addition to the 2010 Nobel Prize, he received an Ig Nobel Prize in 2000 for using the magnetic properties of water scaling to levitate a small frog with magnets. This makes him the first, and thus far only, person to receive both the prestigious science award and its tongue-in-cheek equivalent.

Geim’s research in 1997 into the possible effects of magnetism on water scaling led to the famous discovery of direct diamagnetic levitation of water, and led to a frog being levitated.[51] For this experiment, he and Michael Berry received the 2000 Ig Nobel Prize.[5] “We were asked first whether we dared to accept this prize, and I take pride in our sense of humor and self-deprecation that we did”.[30]

He said of the range of subjects he has studied: “Many people choose a subject for their PhD and then continue the same subject until they retire. I despise this approach. I have changed my subject five times before I got my first tenured position and that helped me to learn different subjects.”[34]

He named his favourite hamster, H.A.M.S. ter Tisha, co-author in a 2001 research paper.

A colleague of Geim said that his award shows that people can still win a Nobel by “mucking about in a lab”.[76]

On winning both a Nobel and Ig Nobel, he has stated that

Predicting a Nobel Prize for “Mathematics of Ideas”