“Inflation” Is a Rise in the Quantity of Money

Central banks are the very source of the phenomenon that all prices of goods tend to rise over time. They hold the money production monopoly and increase — in close cooperation with commercial banks — the outstanding quantity of money through credit expansion, an increase in the supply of credit that is not backed by real savings. It goes without saying that it is rather profitable to be active in the money-production business.

The increase in the quantity of money results, and necessarily so, in higher prices compared to a situation in which the quantity of money has not been increased. This is no arbitrary assertion but stems from logical reasoning: a rise in people’s money holding lowers the marginal utility of the additional money unit, meaning that the marginal utility of other goods that can be exchanged against money rises.

asset price inflation destroys the purchasing power of money in the same way that price inflation of consumer goods does. Take, for instance, stock market prices. If prices rise from, say, $100 to $200, the purchasing power of the money unit would drop by 50 percent. The owner of the stock becomes richer, while the holder of dollars become poorer. In fact, this is precisely what has been happening in the last decades. 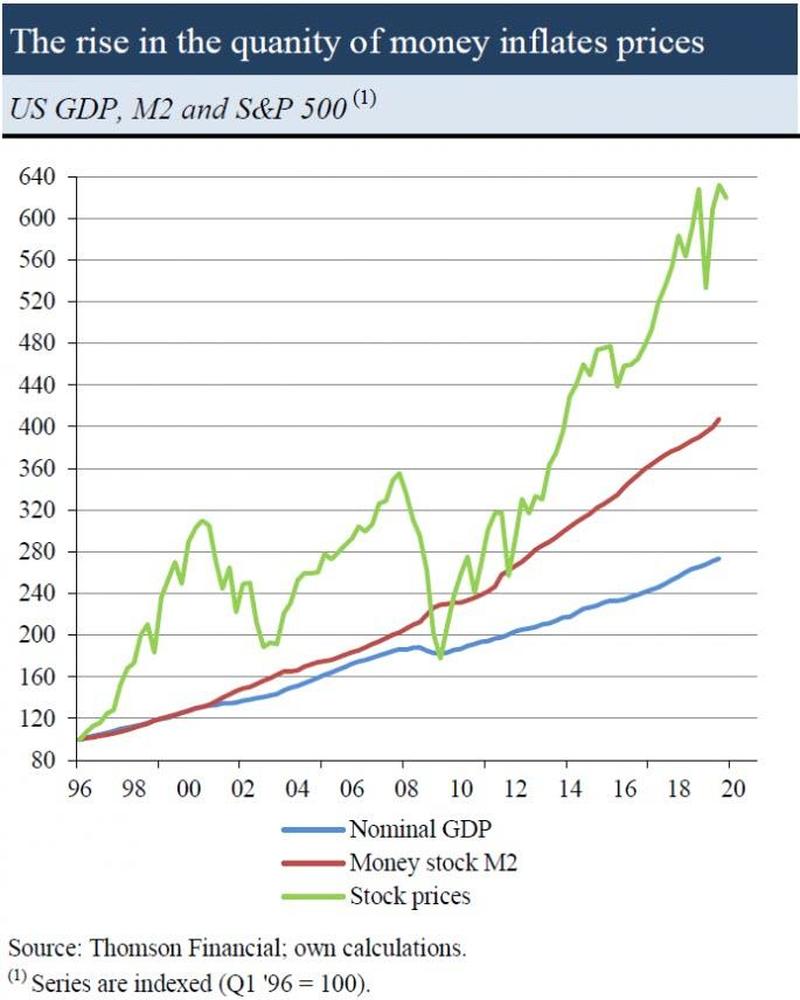 join the call for better, sound money — money that lives up to the highest economic and ethical standards. This can be achieved by simply creating a free market in money, where people are free to choose the kind of money they would like to use, and where entrepreneurial spirits are free to make their fellow people sound-money offers.

A free market in money — which would be tantamount to putting an end to central banks’ money production monopolies — is actually easy to establish. Just strip the official currency of its privileged “legal tender” status and remove all capital gain and sales taxes on all media that stand an excellent chance to compete for becoming currency — most notably gold and silver but potentially also crypto units.

A free market in money will work wonders. Many of the evils that haunt our world today — be they chronic price inflation, financial and economic crises, boom-and-bust cycles, and even over-funded governments and aggressive wars, would be greatly reduced. One of the biggest challenges of our time is to reform our money. The solution is to open up the market in money.

The main lessons that global economies should learn from Japan are the following:

The true lesson from Japan is that central planners will continue to prefer to gradually nationalize the economy before even considering a moderate reduction in government size and control of the economy. The result will be almost no growth, poor productivity, and rising discontent, but the bureaucratic machine will be safe.

Will MMT Collapse the Financial System?

Governments facing soaring demands and limited tax revenues are naturally tempted to meet these demands with “free” new currency, since the political and financial pain caused by skyrocketing taxes leads to governments being tossed from power. 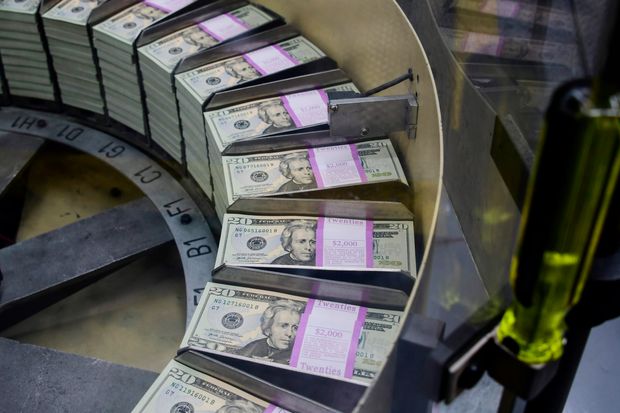 This generates inflation, which impoverishes everyone using the currency.

Since it doesn’t generate more consumable goods and services, the expansion of wages and demand for materials will drive prices higher.

The core difficulty here is that the democratic political process is intrinsically skewed to short-term, politically expedient dynamics: politicians focus by necessity on winning re-election, and they will naturally approve new issuance of currency and new spending to placate the demands of constituents, lobbyists and campaign donors.

I honestly don’t see any intrinsic limit on political expediency. Politicians need to be forced to say, “I know your need is legitimate, but the money’s simply not there.”

Without some real-world limit on the issuance of new money, money will be issued in surplus because the issuance isn’t an economic process, it’s a political process.

ultimately, “wealth” (as measured in new goods and services generated by capital and labor) is generated by increasing productivity, via investment in greater efficiencies.

Much of the spending people want — repairing bridges, supplanting natural gas electrical generation with solar or wind, and so on — are not necessarily increasing productivity: the repaired bridge carries the same number of vehicles as it did before, so there is no increase in productivity.

In other words, efficiency and productivity are core dynamics, yet the MMT process is fundamentally political, and politics has little interest in efficiency or productivity. It is, as noted above, politically expedient, with a default setting to put off tough decisions into the future.

In the private sector, return on capital and the productivity of labor and processes are the core dynamics. These rationalize decisions to prioritize efficient use of capital, labor and resources. Absent this rationalization, resources can be squandered for politically expedient reasons.

In other words, capital, resources and labor can be mal-invested, which brings up the opportunity cost: all the capital, labor and resources squandered on “bridges to nowhere” and other pork-barrel projects are no longer available for truly productive use.

The key question here is: How do we harness our intrinsically scarce capital, labor and resources to increase productivity and socially/ecologically beneficial investments in a sustainable way?

MMT’s diagnosis is that a lack of currency is the primary problem. The MMT solution assumes the new currency can be efficiently invested within the existing political system without disrupting the increasingly precarious existing financial system.

While the appeal of MMT is self-evident, it seems to me that both the financial and political systems are broken in ways that MMT, no matter how it’s managed, cannot fix.

The problem is we’re misallocating capital, resources and labor on a vast scale. That’s the problem. Adding more currency and capacity/”growth” doesn’t fix this problem, it actually makes it worse.

If we look around at the trillions of dollars in recently issued currency floating around the world looking for a yield, the trillions poured into asset bubbles that only benefit the few at the top, the gargantuan waste of capital, it’s hard not to see MMT as a “green” Band-Aid for a profoundly broken, wasteful, unsustainable system.

MMT leaves the existing status quo essentially untouched and adds a new layer of newly issued currency and spending, and a new layer of “growth” and consumption, consumption that no matter how socially beneficial is still an additional burden on resources.

In effect, MMT is another attempt to preserve a dysfunctional status quo by adding another layer of newly issued currency and “growth.” More “growth,” even the sort envisioned as “Green,” is simply adding to a destructive system.

This is a fatal flaw in MMT. Relying on politicians to impose limits on their own desire to win re-election is to deny human nature.
To sum up: MMT is presented as the solution to the “problem” of insufficient government funding, but that’s not the real problem:

The real problem is the purchasing power of the fiat currency that will be issued in the trillions of dollars.

It’s a recipe for the collapse of money as we know it.

The research conference, hosted by the Chicago Fed, is the centerpiece of a yearlong internal review of the central bank’s inflation target announced in November. Since then, the issues at hand have become more pressing. Inflation has drifted below the Fed’s 2% target and an escalating trade war has pulled forward concerns about recession risk.

advocates of another approach — targeting the growth of nominal income — staged a mini-revolt at Wednesday’s first session. After noted monetary economist Lars Svensson gave that approach short shrift in his presentation, a trio of conference participants pointed to its advantages during the question and answer period, including St. Louis President James Bullard.

Under such a strategy, the Fed would target the growth of nominal gross domestic product — which unlike real GDP isn’t adjusted for inflation. (So if inflation rises 2% and real GDP rises 4% then nominal GDP goes up 6%.)

Svensson argued that a nominal GDP target would not be consistent with the Fed’s dual mandate to achieve price stability and maximum employment.

“Lower GDP and employment is fine as long as prices are higher,” Svensson, a Stockholm School of Economics professor and former Swedish central banker, said.

Bullard took issue with that assessment. “I think Lars is off base here,” he said.

He argued that contract holders, such as homeowners with 30-year mortgages, were concerned with the growth of the overall income they have to meet those obligations.