the best startup ideas seem at first like bad ideas

the best startup ideas seem at first like bad ideas. I’ve written about this before: if a good idea were obviously good, someone else would already have done it. So the most successful founders tend to work on ideas that few beside them realize are good. Which is not that far from a description of insanity, till you reach the point where you see results.

The first time Peter Thiel spoke at YC he drew a Venn diagram that illustrates the situation perfectly. He drew two intersecting circles, one labelled “seems like a bad idea” and the other “is a good idea.” The intersection is the sweet spot for startups. 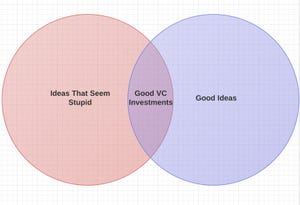 This entry was posted in Entrepreneurship. Bookmark the permalink.