Proofs in mathematics and not just formal arguments that show that a theorem is correct. They are much more. They must show why and how something is true.

They must explain and extend our understanding of why something is true. They must do more than just demonstrate that something is correct.

They must also make it clear what they claim to prove.

A difficulty we felt, then, was that care must be given to what one is claiming to prove. In mathematics often what is being proved is simple to state. In practice that is less clear. A long complex statement may not correctly capture what one is trying to prove.

a great proof is a proof that helps create new proofs of something else. …

What mean is a great proof is one that enables new insights, that enables further progress, that advances the field. Not just a result that “checks” for correctness. there is a growing community of mathematicians who regard the equal sign as math’s original error. They see it as a veneer that hides important complexities in the way quantities are related — complexities that could unlock solutions to an enormous number of problems. They want to reformulate mathematics in the looser language of equivalence.

“We came up with this notion of equality,” said Jonathan Campbell of Duke University. “It should have been equivalence all along.”

the growing pains that a venerable field like mathematics undergoes whenever it tries to absorb a big new idea, especially an idea that challenges the meaning of its most important concept. “There’s an appropriate level of conservativity in the mathematics community,” said Clark Barwick of the University of Edinburgh. “I just don’t think you can expect any population of mathematicians to accept any tool from anywhere very quickly without giving them convincing reasons to think about it.”

While equality is a strict relationship — either two things are equal or they’re not — equivalence comes in different forms.

When you can exactly match each element of one set with an element in the other, that’s a strong form of equivalence. But in an area of mathematics called homotopy theory, for example, two shapes (or geometric spaces) are equivalent if you can stretch or compress one into the other without cutting or tearing it. 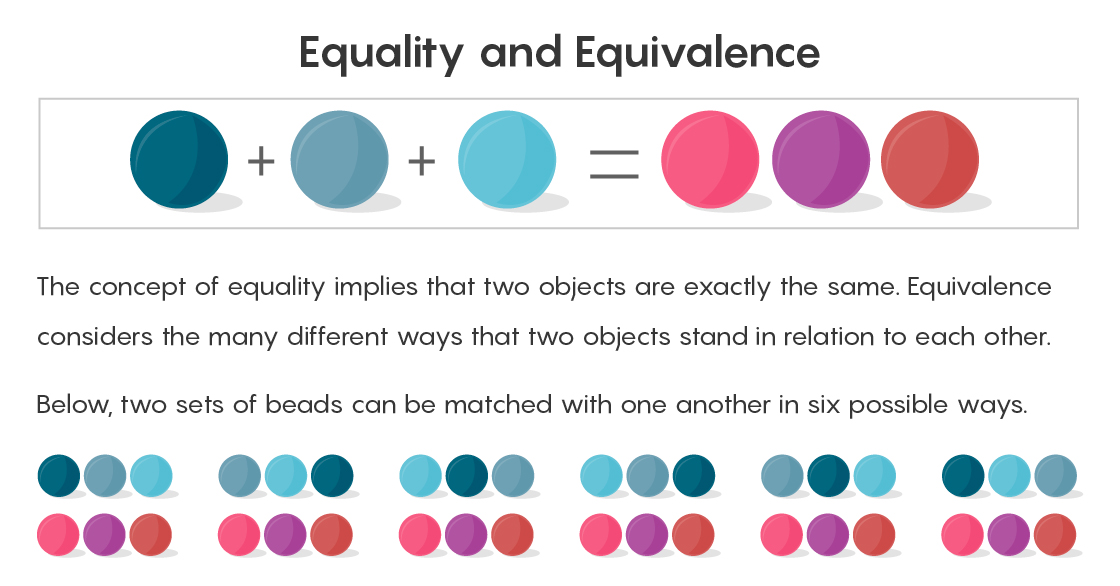 In the perspective of category theory, you forget about the explicit way in which any one object is described and focus instead on how an object is situated among all other objects of its type.

In these subtler notions of equivalence, the amount of information about how two objects are related increases dramatically. 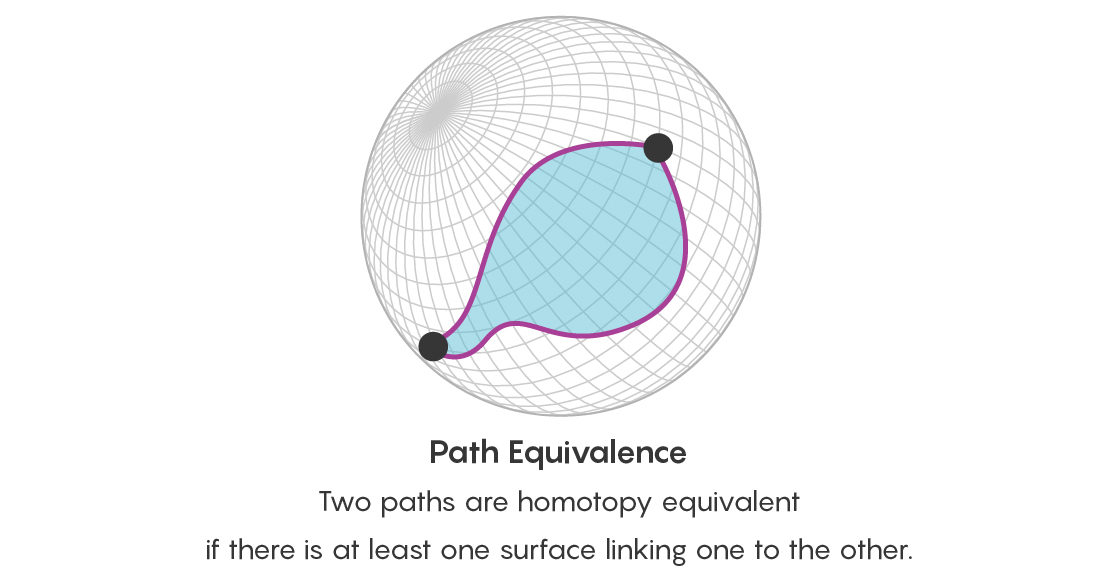 Lurie’s work represented a big challenge. At heart it was a provocation: Here is a better way to do math. The message was especially pointed for mathematicians who’d spent their careers developing methods that Lurie’s work transcended.

Lurie’s work was hard to swallow in other ways. The volume of material meant that mathematicians would need to invest years reading his books. That’s an almost impossible requirement for busy mathematicians in midcareer, and it’s a highly risky one for graduate students who have only a few years to produce results that will get them a job.

Lurie’s work was also highly abstract, even in comparison with the highly abstract nature of everything else in advanced mathematics. As a matter of taste, it just wasn’t for everyone. “Many people did view Lurie’s work as abstract nonsense, and many people absolutely loved it and took to it,” Campbell said. “Then there were responses in between, including just full-on not understanding it at all.”

Riehl and Verity hope to move infinity category theory forward in another way as well. They’re specifying aspects of infinity category theory that work regardless of the model you’re in. This “model-independent” presentation has a plug-and-play quality that they hope will invite mathematicians into the field who might have been staying away while Higher Topos Theory was the only way in. 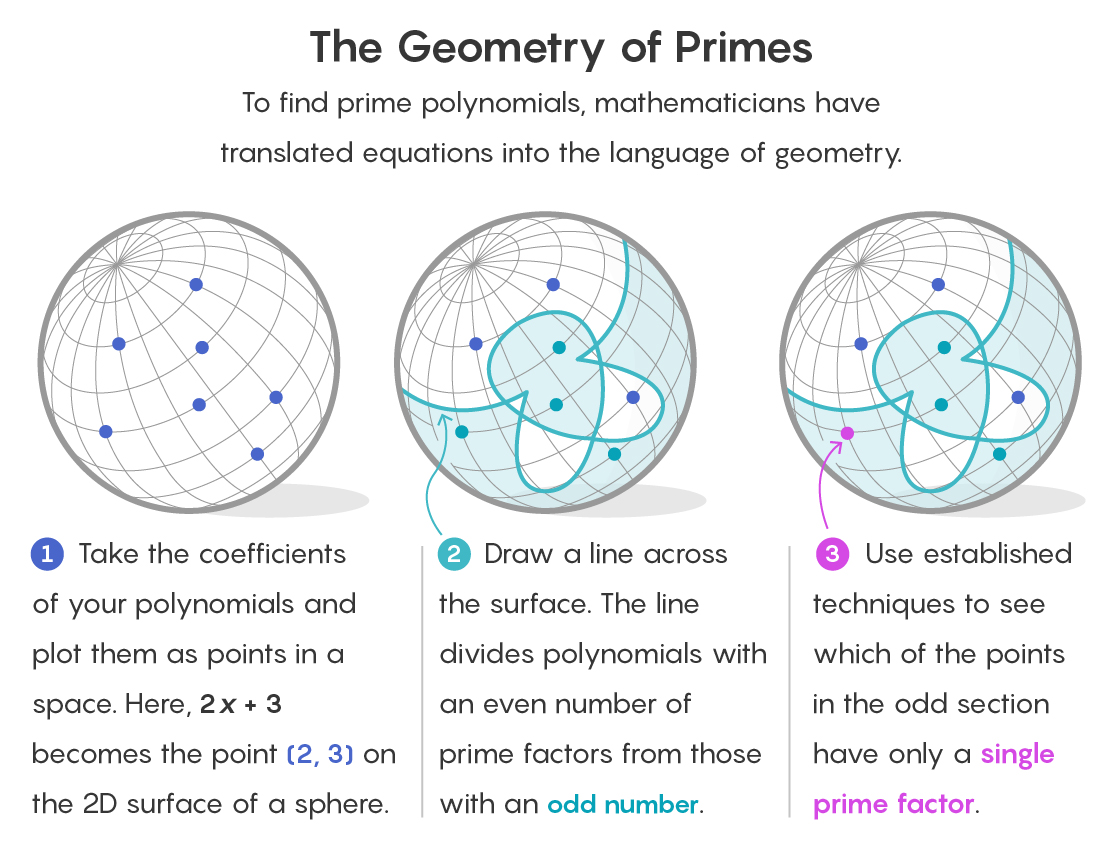 Pictures of his “scribbles” are available here:

Enjoyed by people of all ages all over the place. The idea is simple and brilliant. Start with some basic blocks that can be joined together.Add creativity, imagination and a bit of ingenuity. Build anything.

Mathematics is exactly the same.

We start with some basic building blocks and ways of joining them together. And then we use creativity, and, yes, imagination and certainly ingenuity, and try to build anything 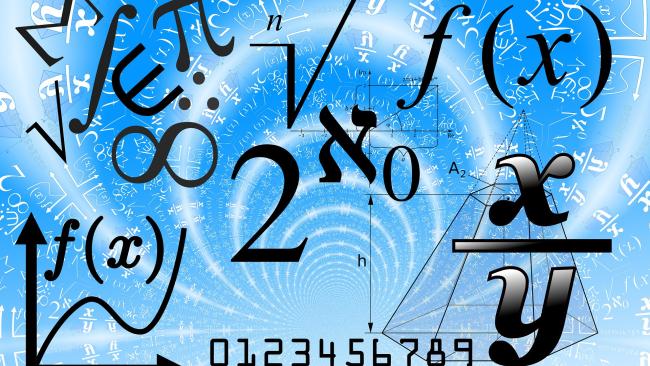 A lot of maths can be done without really thinking about how structures are built. That’s why my field, Category Theory, only came into existence about fifty years ago. That’s when people realised that things were getting complicated, and we needed to work out the principles of building in order to help other mathematicians build good mathematical structures. That’s what Category Theory is trying to do. 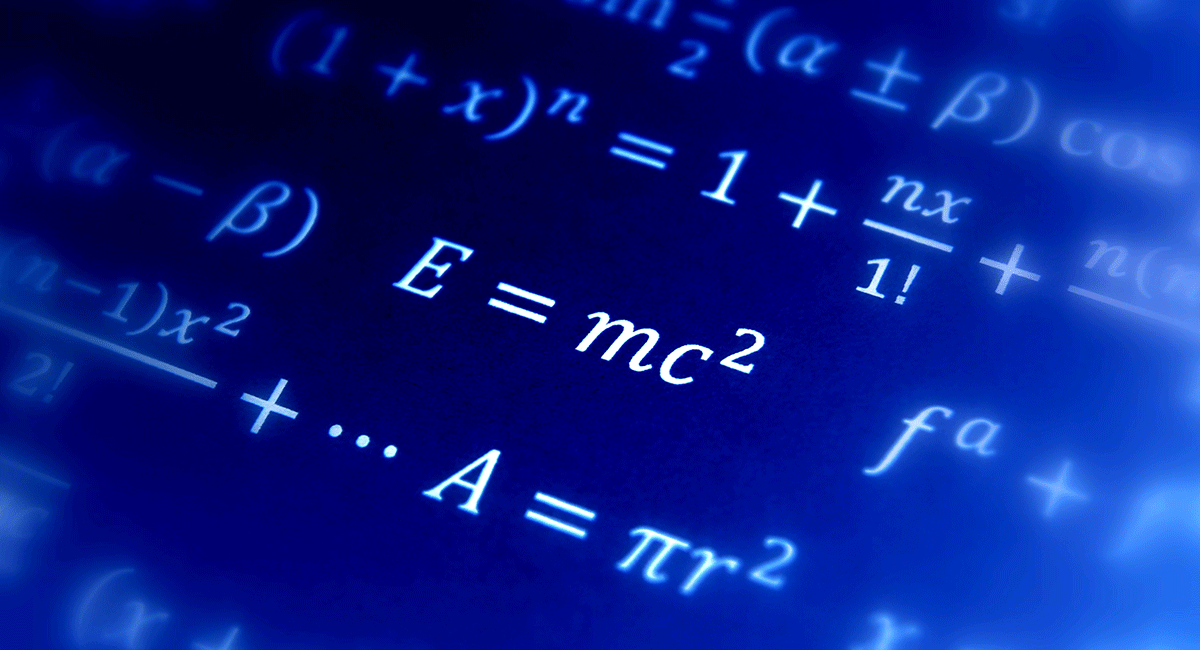 A mathematical system is like a lego set. You have certain types of pieces—perhaps just basic pieces, perhaps castle pieces or spaceship pieces—that can be stuck together in certain ways.A mathematical structure is what you build with it.So really, mathematicians are just sitting around playing with their lego. Well,perhaps I should just speak for myself. I sit around and play with my lego.

The idea is to draw people in and make them curious about when the maths starts. I want the metaphor to connect with someone viscerally first. I have an image that there is a space that is a curious space in the brain, and you have to open the doors to it before you can let ideas in.

If those doors are closed you’ll have a big problem getting anything else in. Maths phobic people have closed and locked those doors because they are so afraid of maths, so you have to open them gently, or even bypass them so that instead of going through the suspicious brain it just connects with your emotion straight away. That’s where the sprouts come in: there’s always a point to the ridiculous things I’m doing.

My book talked about category theory, which is the mathematics of mathematics.

One of my favourite mathematicians is Emmy Noether, who is exceptionally important, but you may not have hard of her because although her work was an important contribution to Einstein’s Theory of Relativity, her contribution was about making a connection between maths and physics, rather than solving a huge old problem. Winning prizes and breaking records is more obviously sensational, and it is easier to make it into a story.

My new book, Beyond Infinity, has just been published. Infinity is fascinating: it’s one of those things that everyone can think about without being able to understand it. The meta-message is this is what is fantastic about mathematics: it is the not understanding things. Make them be questions: in exploring the answer you can explore things you otherwise would not have seen.

Under what circumstances is it possible to represent irrational numbers that go on forever — like pi — with simple fractions, like 227? The proof establishes that the answer to this very general question turns on the outcome of a single calculation.

Mathematicians had suspected for decades that this simple criterion was the key to understanding when good approximations are available, but they were never able to prove it. Koukoulopoulos and Maynard were able to do so only after they reimagined this problem about numbers in terms of connections between points and lines in a graph — a dramatic shift in perspective.

maybe it’s natural to wonder — if we can’t express irrational numbers exactly, how close can we get? This is the business of rational approximation. Ancient mathematicians, for instance, recognized that the elusive ratio of a circle’s circumference to its diameter can be well approximated by the fraction 227. Later mathematicians discovered an even better and nearly as concise approximation for pi: 355/113. 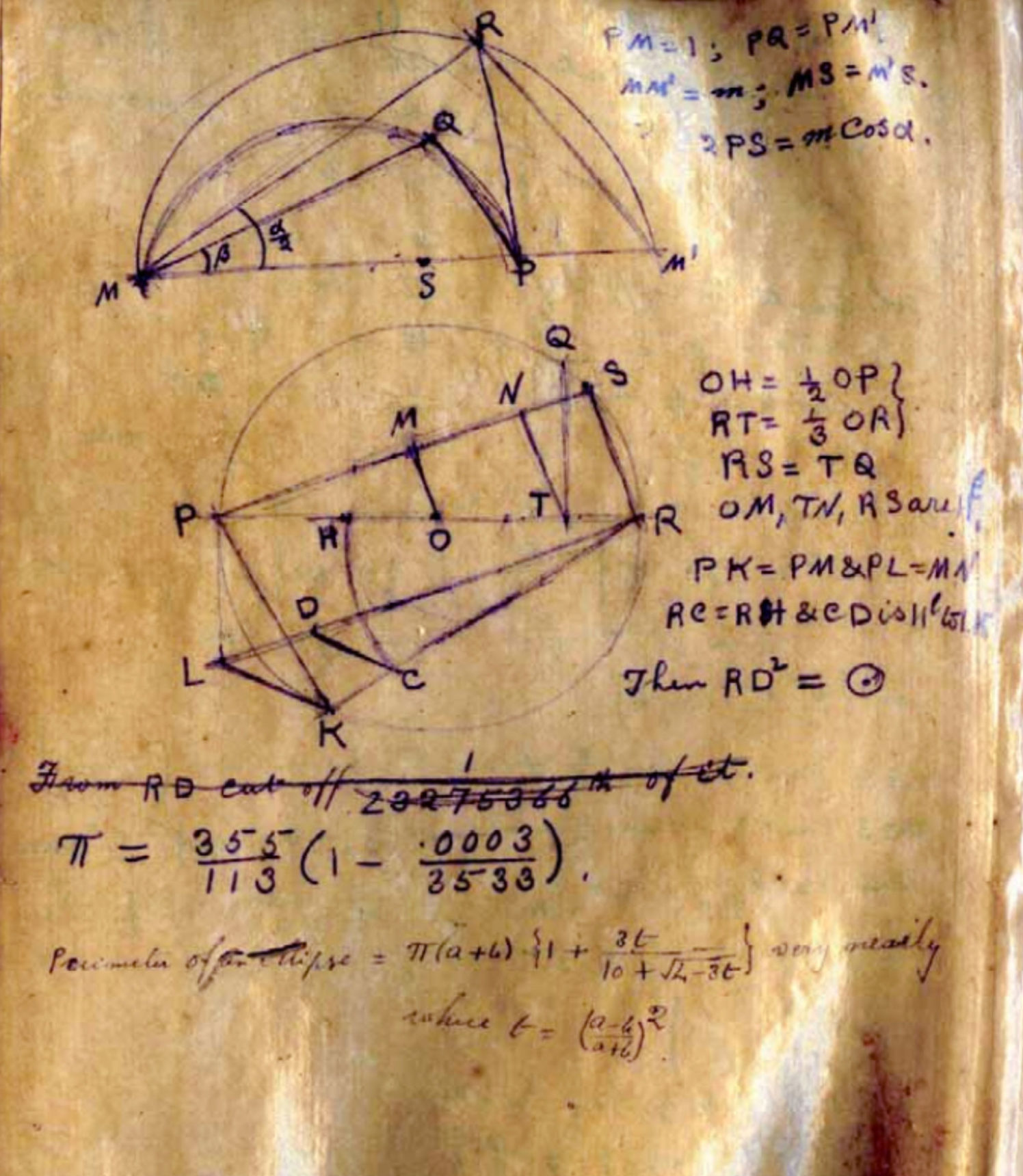 The key to solving the conjecture has been to find a way to precisely quantify the overlap in the sets of irrational numbers approximated by denominators with many small prime factors in common. For 80 years no one could do it. Koukoulopoulos and Maynard got there by finding a completely different way to look at the problem.

In their new proof, they create a graph out of their denominators — plotting them as points and connecting the points with a line if they share a lot of prime factors. The structure of this graph encodes the overlap between the irrational numbers approximated by each denominator. And while that overlap is hard to assay directly, Koukoulopoulos and Maynard found a way to analyze the structure of the graph using techniques from graph theory — and the information they cared about fell out from there.

“The graph is a visual aid, it’s a very beautiful language in which to think about the problem,” Koukoulopoulos said.

It’s an elegant test that takes a vast question about the nature of rational approximation and boils it down to a single calculable value. By proving that the test holds universally, Koukoulopoulos and Maynard have achieved one of the rarest feats in mathematics: They’ve given a final answer to a foundational concern in their field.

“Their proof is a necessary and sufficient result,” Green said. “I suppose this marks the end of a chapter.” 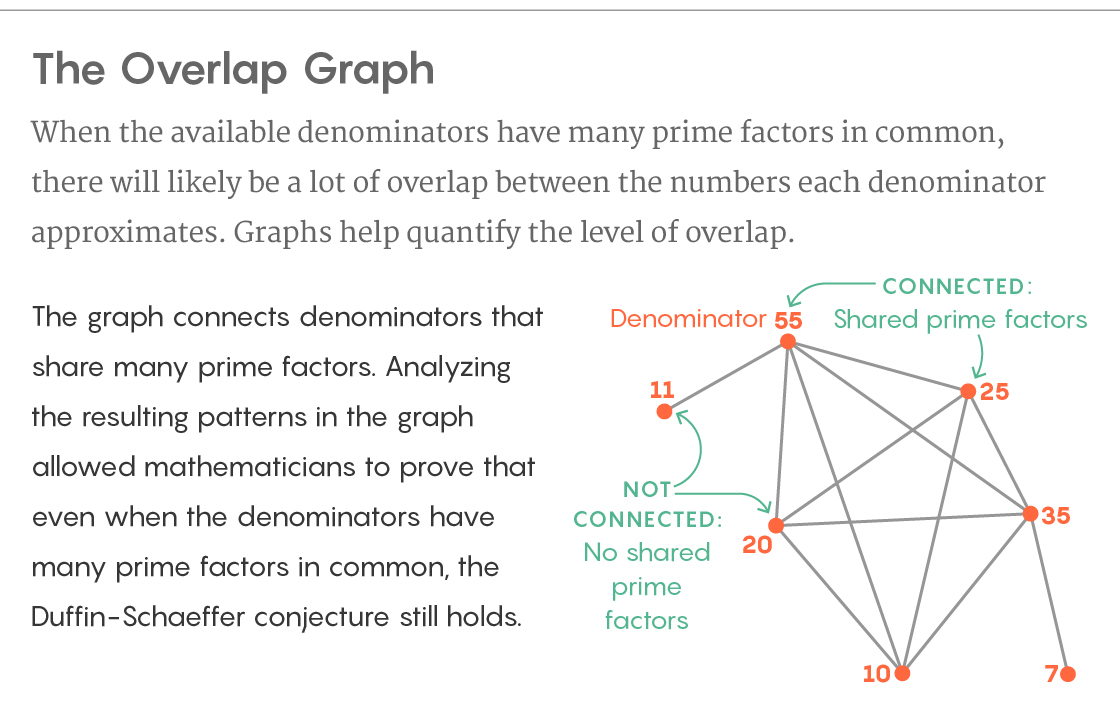