An 800-feet ladder between school & home

Authorities in south-west China have come to the aid of schoolchildren who had to climb an 800m cliff to get to and from school – by installing a thin steel ladder at the site. 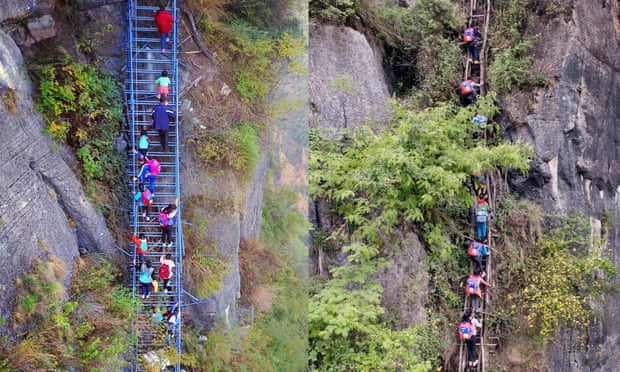 Close-up of students on the old ladder 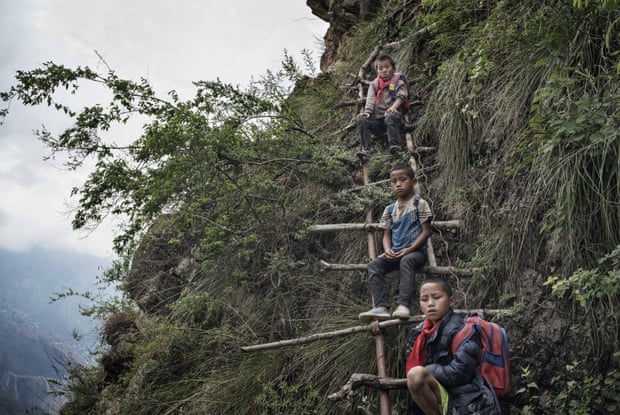 How to be a Successful Scientist

Broaden yourself to more than one field.
Read widely.
Use analogies to link things together.
Work on different projects at the same time.
Use visual as well as verbal representations.
Don’t work on what everyone else is doing.
Use multiple methods.
Seek novel mechanisms.
Find new ways of making problems soluble, e.g. by new techniques.

Take anomalies seriously.
Learn from failures.
Recover from failures.
Avoid excessive attachment to your own ideas.
Be willing to recognize and admit mistakes.

Pursue projects that are fun.
Play with ideas and things.
Ask interesting questions.
Take risks.
Have a devotion for truth and a passion for reputation.
Have an inclination toward originality and a taste for research.
Have a desire for the gratification of discovery.
Have a strong desire to comprehend.
Never do anything that bores you.

Find smart collaborators.
Organize good teams.
Study how others are successful.
Listen to people with experience.
Foster different cognitive styles.
Communicate your work to others.
Marry for psychological compatibility.
Tell close colleagues everything you know.
Communicate research results effectively.
Learn from winners.
Have people to fall back on when you get into trouble.

They teach themselves from an early age, have many deep interests, rather than just one. And they are very persistent, even in the face of rejection.

… many of these highly creative people are autodidacts. They are people who teach themselves. That makes them almost misfits in the educational system that they get put into. It would be nice if educators were aware of the existence of autodidacts and the need to give them slightly different education experiences, to nurture them.

Life was good in Canada; only one thing was jarring. At that time, “there was a ceiling to the level of bigness and ambition with which people thought about things,” Arkani-Hamed said. He was particularly struck by how proud many Canadians were of having built the robot arms of NASA’s space shuttles. During news coverage of launches, he recalled, “there would be all these close-ins on the arm, on the ‘Canada’ on the arm, and I’d be, like, the space shuttle is a bigger deal!”

As radical as it sounds, many physicists now think that the spatiotemporal dimensions we seem to move around in are not fundamental, but rather emerge from a deeper, truer description of reality. And in 2013, anunexpected discovery by Arkani-Hamed and his studentJaroslav Trnka offered a possible clue to what the underlying laws of nature might look like.

They uncovered a multifaceted geometric object whose volume encodes the outcomes of particle collisions—beastly numbers to calculate with traditional methods. The discovery suggested that the usual picture of particles interacting in space and time is obscuring something far simpler: the timeless logic of intersecting lines and planes. Although the “amplituhedron” (as Arkani-Hamed and Trnka dubbed their object) initially described a simplified version of particle physics, researchers are now working to extend its geometry to describe more realistic particle interactions and forces, including gravity. 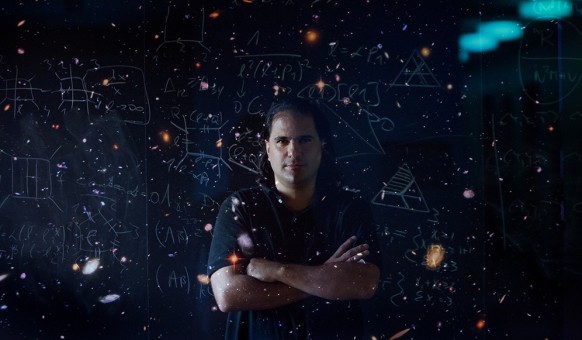 He believes that the interchangeability of points and lines in the geometry of the amplituhedron may be the origin of a mysterious mathematical duality between particles and strings, the basic building blocks of nature in string theory. And particle interactions are just “the baby version of the problem,” he said. His ultimate goal is to describe the entire cosmological history of the universe as a mathematical object.

Ultimately, he said, anywhere from 10 to 500 years from now, the amplituhedron and these cosmological patterns will merge and become part of a single, spectacular mathematical structure that describes the entire past, present and future of everything “in some timeless, autonomous way.”

How to Write Productively

Einstein didn’t take 7 years to find the answer to a question; instead, he took 7 years to ask the right question in the first place.

After special relativity, Einstein decided to find a way to incorporate gravity into his theory. Special relativity is all about inertial reference frames and observers traveling at constant velocities, but free-falling observers moving under the influence of gravity always accelerate, so how could he end up with a fully relativistic theory of gravity?

Answering such a question with the knowledge that he had is like trying to navigate a huge expanse of complete darkness. Somehow you’ve got to ask a series of new, important and relevant questions that are also solvable, to try to make sense of this new territory. Any question that you ask could be intractable, but more frequently they could also be irrelevant. Even if you’ve found the right question, you must still figure out how to attack the problem.

That Einstein unraveled this whole thing is nothing short of remarkable, because it must have been confusing as hell when it was first being stated. In fact, Einstein initially set aside what became ultimately the right approach for about 2 years before coming back to it and resolving his earlier confusion. Once he understood that the use of curvature tensors of the spacetime metric was the right way to go, the final answer ended up being very simple:

which basically says that the local curvature of spacetime is proportional to the energy/momentum content at that point. Framed correctly, this is pretty straightforward, and any mathematician working on Riemannian geometry, given the right way of thinking about the problem, could have come up with it. But the key point as I’ve been arguing is in the phrase in italics: you have to go from a physical picture of gravity, and draw the connection between that and something as mathematically abstract as Riemannian geometry before things start to make perfect sense.

Once you appreciate the process by which someone could have come up with this, a question like “was Einstein bad at math” becomes absolutely pointless. He wasn’t an expert at Riemannian geometry, but he was the first to see the connection between geometry and gravity, which in itself is a profound accomplishment. He then successfully learnt the material and put all of the very confusing pieces together, and published his full theory at the same time as David Hilbert, one of the preeminent mathematicians of the 20th century, who based his work on Einstein’s earlier realizations in the first place.

Hillis & Feynman: It’s Amateurs who Made The Progress

n retrospect I realize that in almost everything that we worked on together, we were both amateurs. In digital physics, neural networks, even parallel computing, we never really knew what we were doing. But the things that we studied were so new that no one else knew exactly what they were doing either. It was amateurs who made the progress.

He was always searching for patterns, for connections, for a new way of looking at something, but I suspect his motivation was not so much to understand the world as it was to find new ideas to explain. The act of discovery was not complete for him until he had taught it to someone else.

How to Turn a Learner into A Discoverer

How do you turn a learner into a discoverer?

Students are more confused than ever about what the next step is,” said Nicole Oringer, co-owner of Ivy Educational Services, a New Jersey company that began career coaching four years ago, often to students they had helped with college applications. Turning to experts seems only natural: “This is a generation of students that has been given a lot of resources and advice.”

Personal career guidance is not cheap. While help finding a job can cost a few hundred dollars, some companies charge $300 an hour for services that might involve deciphering strengths, arranging job shadowing and working on résumés, interview techniques and job search strategies. Walking a student through an extended exploration can run $5,000.

Mr. Harsh’s parents engaged Maura Koutoujian of Jody Michael Associates for the $4,995 package, including a proprietary “career discovery process.” From October through March, they met almost weekly in person or over FaceTime. Parents who can afford the service slip it under the cost umbrella of launching a child into adulthood, like tutoring or college application help. Mr. Harsh’s father, Michael, a retired vice president at General Electric, sees it as a worthwhile investment to help his son learn how to leverage his skills “to make a career.” A coach “can help pull that out, frame it,” he said. “We want it to be a deliberate step, not something that happens.”

Students have reason to fret. There are more choices, and a furiously evolving career landscape. “They face an entirely different reality than their parents did,” said Anthony P. Carnevale, director of the Georgetown University Center on Education and the Workforce.

He noted that high school graduates once could work up to engineering jobs. Now, requirements for more education have made training more drawn out and specialized. Between 1985 and 2010, the number of programs of study jumped from 462 to 2,260, to serve what he described as a “much more complicated career pathway.” Career fields have multiplied, too. In 1950, the Bureau of Labor Statistics tracked 270; in 2010, there were 840.

Students must figure out what they care about and where to jump on. And they want help doing it.

As the job scene grows more complex, she said, students need even more confidence to manage setbacks and plot moves. “This notion that you always need a handler, that you will always need somebody, that you don’t have the wherewithal to figure it out yourself — I think that’s damaging.”

And it could hurt job success. A 2014 survey of 482 students at California State University, Fresno, found that those with the most intense helicopter parenting felt less able to make decisions. They gave “maladaptive responses” to workplace scenarios, said Julie Olson-Buchanan, one of two professors of management who conducted the study.