A Texas academic created a stir last year by alleging that Bitcoin’s astronomical surge in 2017 was probably triggered by manipulation. He’s now doubling down with a striking new claim: a single market whale was likely behind the misconduct, seemingly with the power to move prices at will.

One entity on the cryptocurrency exchange Bitfinex appears capable of sending the price of Bitcoin higher when it falls below certain thresholds, according to University of Texas Professor John Griffin and Ohio State University’s Amin Shams. Griffin and Shams, who have updated a paper they first published in 2018, say the transactions rely on Tether, a widely used digital token that is meant to hold its value at $1.

Griffin and Shams’s hypothesis that Bitcoin was manipulated is based partly on the theory that new Tethers are created without the dollars to back them and then used to buy Bitcoin, leading to rising prices.

The authors examined Tether and Bitcoin transactions from March 1, 2017 to March 31, 2018, concluding that Bitcoin purchases on Bitfinex increased whenever Bitcoin’s value fell by certain increments. Griffin and Shams didn’t name the entity on Bitfinex that they think was responsible. They shared their updated research with Bloomberg News. 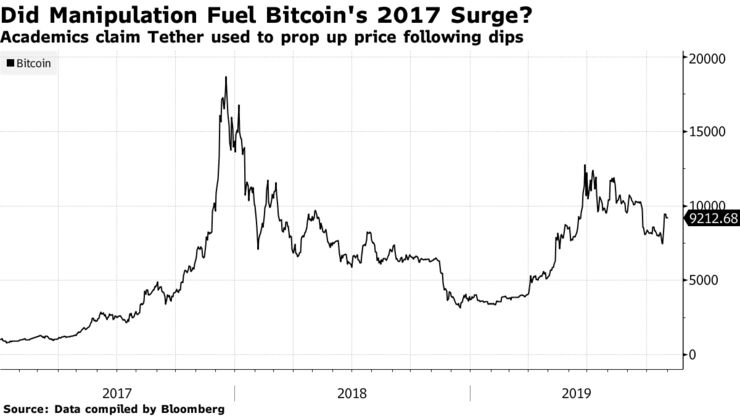 Circle CEO Jeremy Allair labeled the WSJ’s story on the matter “extremely weak reporting” and explained that “in 2017/2018 there was demand for buying BTC and a massive alt coin rally. The majority of that demand came from Asia and China, and since there were no CNY ramps into BTC, everyone went to offshore USDT processors. These processors would then generate large prints of USDT. The only thing this supposed analysis shows is that Asia traders demanded fiat to buy BTC.”

The Trump administration acted to deflate the bitcoin bubble of 2017 by allowing the introduction of futures products, a former official said Monday.

Christopher Giancarlo, who left the U.S. Commodity Futures Trading Commission (CFTC) at the end of his five-year term as chairman in April, told CoinDesk in an interview:

“One of the untold stories of the past few years is that the CFTC, the Treasury, the SEC and the [National Economic Council] director at the time, Gary Cohn, believed that the launch of bitcoin futures would have the impact of popping the bitcoin bubble. And it worked.”

Bitcoin futures listed by the Chicago Mercantile Exchange (CME) and the CBOE Futures Exchange (CFE) were announced by the CFTC on Dec. 1, 2017 and went live on Dec. 18. Bitcoin’s price peaked at nearly $20,000 one day earlier, on Dec. 17, before falling dramatically in subsequent weeks.

Giancarlo cited research by the San Francisco Federal Reserve that also credits the introduction of bitcoin futures for reining in a market driven by optimists.

Without shorts, a market has no pessimists. “If you do believe it’s a ridiculous price but you don’t own, there’s no way to express that view,” Giancarlo told CoinDesk, adding:

“If you don’t have that derivative, then all you’ve got are believers [and] it’s a believers’ market.”

The lack of easy ways to short has been cited by other researchers as propping up prices in other crypto assets. 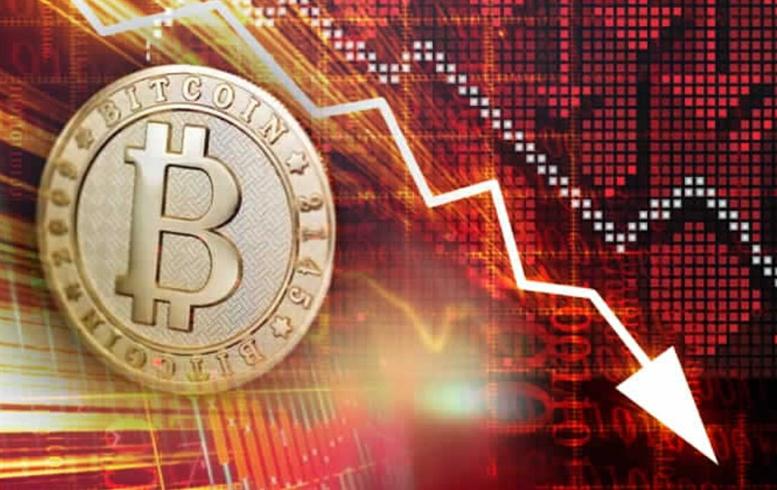 Moving money is a lot like moving goods. If either money or a physical item needs to get from point A to point B, and you happen to control the only route, then you get to charge a toll. If an unrelated secular trend leads to a lot more goods or payments needing to traverse that route, then you make a lot of money.

Today, the good is electronic payments, and the routes are cards rails and e-money schemes. As commerce grows increasingly digital, global and platform based, the few available pipes to send payments grow increasingly profitable. In the 1800s the good was industrial and agricultural supply, and the routes were rivers and lakes.

As the world grew increasingly industrial and trade-oriented, the few available routes out of North America grew increasingly important. Contemporary companies like Stripe and PayPal are changing the payment landscape by building important bridges between legacy payment pathways. Back then, the same thing was accomplished by building canals.

in the absence of a proper network that connects two points directly, even the most cumbersome, indirect and expensive transportation options could do extremely well. That’s the FinTech payment boom of 2019 for you.

What makes companies like Stripe so successful is that they can abstract away all of the inefficiencies and messy underbelly of the siloed payment industry and give merchants and users a payment experience that looks seamless. This is a valuable contribution today, but not nearly as good as a grid that allows instant point to point transfers of money. That’s the stablecoin vision of tomorrow.

A network, be it a physical one for moving goods or a digital one for moving value, wants to be built. The efficiencies and growth economics are too tempting to ignore. The more money the Visas, PayPals and Stripes of the world make operating their canals, the more everyone else will be willing to invest in a network that replaces them — despite challenges like this.

Libra is just the beginning. Whether it succeeds, or even launches, is a moot point. The idea of a decentralized payment network that only charges minimal fees to provide security (as opposed to seeking rent to reward shareholders) has now been validated, and there’s no turning back. If the statement “your profit margins are my opportunity” is to be believed, then there is no greater opportunity in all financial services than a secure global blockchain-based payment network.

The US dollar will make up 50 per cent of the basket of currencies backing Facebook’s planned digital coin Libra, with the euro, yen, sterling and Singapore dollar comprising the rest, German news magazine Der Spiegel reported, referring to a letter from Facebook.

China’s yuan currency will not be included, which could help smooth the planned cryptocurrency’s path in the United States, where officials have raised concerns about the yuan’s growing stature as a reserve currency at a time when trade relations between the two economic powers are tense.

In a letter responding to a question from German legislator Fabio De Masi, Facebook said the dollar would make up 50 per cent of the basket, followed by the euro with 18 per cent, the yen with 14 per cent, the British pound with 11 per cent and the Singapore dollar with 7 per cent, according to Der Spiegel.

ETH Fails to Live up to Expectations (Hype?)

Kyle Samani, co-founder of a crypto hedge fund Multicoin Capital, has stated the reason why eth has performed so poorly against bitcoin is because it “failed to live up to its expectations.”

ETH-BTC’s biggest problem over the last 6 months – and in my opinion likely over the next 12-24 at least – is that it’s failed to live up to its expectations: scaling to be the world computer.

Even the reduced vision – the DeFi chain – is clearly not going to work on Ethereum 1.0. There just isn’t enough throughput for more than maybe 5x the current user base.

Reasonable observers are looking at ETH, seeing lots of broken hopes (raiden, plasma, sharding, no interest in tokenized securities, etc) and just allocating to BTC instead.

There is a real irony to this – and the ETH bulls are vocal about it. There is no way in hell BTC in its current form can scale. This is pretty clear to all ETH bulls.

Why then is BTC not suffering like ETH? Because the market’s expectations are orders of magnitude lower.

The idea of BTC as a settlement layer separate from payments layer resonates because that’s how the world already works, even though this vision is clearly stupid and assumes that technology stops moving forward.

And so, for now, the BTC story in tact, despite its long term fundamental problems and the ETH story is pretty weak. There is not much evidence to support DeFi today is more than altcoin traders trading against themselves.

People are tired of waiting. ETH is not unique in having this problem. Basically all 2015-2017 era alts are going through the same problem, and they are all likely to continue to contract against BTC through this cycle, until they can demonstrate product/market fit and value capture.”

He further said there is no evidence so far that any second layer solution works and/or is usable after someone mentioned zk-snarks scaling.

“Teams have never operated at such high velocity, with teams working in person now for client interop, multiclient testnet coming out, and then mainnet. Confidence in this has never been higher, as we now actually, tangibly, see the light at the end of the tunnel.”

Samani said in reply that there is “still no clarity on how cross-shard SCs will actually work in practice, or the second-order effects.”

The People’s Bank of China is “close” to issuing its own cryptocurrency, according to a senior official.

The bank’s researchers have been working intensively since last year to develop systems, and the cryptocurrency is “close to being out,” Mu Changchun, deputy director of the PBOC’s payments department, said at an event held by China Finance 40 Forum over the weekend in Yichun, Heilongjiang.

he remarks signal the PBOC is inching toward formally introducing a digital currency of its own after five years of research. Facebook Inc.’s push to create cryptocurrency Libra has caused concerns among global central banks, including the PBOC, which said the digital asset must be put under central bank oversight to prevent potential foreign exchange risks and protect the authority of monetary policy.

“Libra must be seen as a foreign currency and be put under China’s framework of forex management,” Sun Tianqi, an official from China’s State Administration of Foreign Exchange, said at the forum.

Unlike decentralized blockchain-based offerings, the PBOC’s currency is intended to give Beijing more control over its financial system.

According to patents registered by the central bank, consumers and businesses would download a mobile wallet and swap their yuan for the digital money, which they could use to make and receive payments. Crucially, the PBOC could also track every time money changes hands.

The central bank will “expedite the research of China’s legal digital tender” and monitor the trends of virtual currency development at overseas and at home, the PBOC said in a statement listing its work plan for the second half of 2019 released in early August. 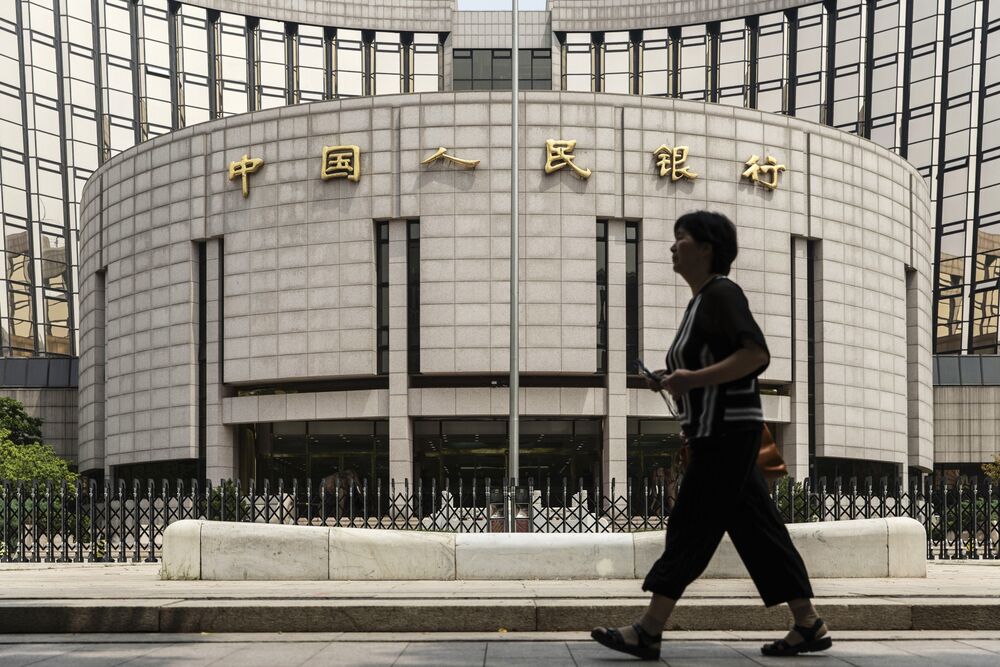