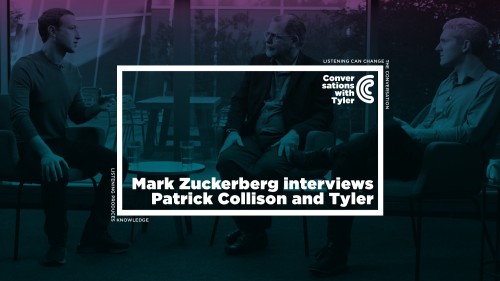 The meta question we’re really interested in is how does progress happen, how do we discover useful knowledge, how is that diffused, and how can we do it better?

if you have a growth rate that is 1 percentage point lower, over the course of a bit more than a century, you could have been three times richer with a higher growth rate

…by having a lower rate of productivity growth, in no given year does it feel that bad, but two, three generations later, you’re much worse off, it’s harder to pay off your debts, harder to solve climate change, harder to address a whole host of problems.

an important question for anybody interested in this area to think about is, well, how should we define progress? And what are the better and worse kinds of it.

Emergent Ventures is a new kind of philanthropy. There’s one layer of yes or no. People are encouraged to apply. If the payoff is 30, 40 years down the road, the attitude is, “Great.” Take a lot of chances. Worry about getting some winners and some risk and not expect the median project to be something that necessarily looks good when taken to a board.

That’s the niche that we felt through CZI that we can help to fill: instead of investing a million dollars in a lab, put $100 million or a couple hundred million dollars over time into building up really important scientific assets for the community. Like helping to fund scientists to go put together this Human Cell Atlas. Think about it as like the periodic table of elements but for biology — all the different kinds of cells in the human body.

The goal is just, if you look throughout the history of science, at least, most major scientific breakthroughs have been preceded by the invention of new tools that help people look at things in different ways. And so the theory is similar to what you’re going at of how you increase the compounding rate of progress.

I’m curious how you think about, in terms of studying this, how much this is like this history and history of science based on data that’s already out there versus “we should just try different models of things and encourage more creativity and more competition and try different things.”

It’s striking to me, if you look at American universities, the list of the top places in 1920 and the list today — it’s completely the same, except we’ve added on California. Otherwise, no change.

Procedures for tenure in the top 50 research universities — almost exactly the same. Whatever you think of those, there’s something gone wrong in the sector. There’s not enough experimentation with how you reward people.

I think we should be historically informed but ultimately, a certain amount of commitment, decision, and just willingness to experiment is going to be required.

Do you have a framework in your head for how would think about or prioritize study in different areas, or is it mostly just about finding really sharp people who have new ideas and funding them to do different kinds or work? How do you think about that overall?

UCKERBERG: Got it. So it’s very much like entrepreneurship in that way. You’re betting on the person more than the idea —

COWEN: But also the vision, right? There has to be a vision, and there are plenty of successful entrepreneurs who are not curious. So for intellectual progress, to really put curiosity very highly is part of my philosophy.

COLLISON: Yeah, tool building is not really subsidized or supported that well.

ZUCKERBERG: Yeah if you want to have a team of ongoing software engineers, you’re going to want an effort that’s going on for a while and that’s more than a couple of people. So kind of thing, I think, there’s a real niche that no one is doing that stuff at the scale it needs to get done. So just pushing on both of things.

COLLISON: Yeah, and there’s uniform agreement on that particular point with every biomedical scientist that I speak with. Tool-building is under-supported.

This conversation is interesting because I think it highlights somewhat of a distinction in — I guess my approach to learning or studying these things is more the “try different things and experiment” and then play it forward, generate new data that doesn’t exist and see how that goes.

And talking to you and seeing the work that you do, and I guess this is probably intrinsic to being an academic too, where more of the work is about looking at datasets that can exist and studying what is already there rather than trying to create the new datasets or approaches. There are two approaches that I think complement each other but are actually quite different in terms of how you approach learning about how to do the best work going forward.

or any of these really important questions about how should science be organized, or which kinds of policies generate the most economic growth, or how one should support the diffusion of innovation, or whatever — I don’t think there exists definitive data on that question. I don’t think by just going deep into the literature you’re going come up with clear answers that one can feel confident in going and executing it or implementing. I think of the data, such that it exists, and the exiting findings as food for hypothesis-generation.

This entry was posted in Growth, Happiness, History. Bookmark the permalink.