The physicists — Stephen Parke of Fermi National Accelerator Laboratory, Xining Zhang of the University of Chicago and Peter Denton of Brookhaven National Laboratory — had arrived at the mathematical identity about two months earlier while grappling with the strange behavior of particles called neutrinos.

They’d noticed that hard-to-compute terms called “eigenvectors,” describing, in this case, the ways that neutrinos propagate through matter, were equal to combinations of terms called “eigenvalues,” which are far easier to compute. Moreover, they realized that the relationship between eigenvectors and eigenvalues — ubiquitous objects in math, physics and engineering that have been studied since the 18th century — seemed to hold more generally.

Eigenvectors and eigenvalues are independent, and normally they must be calculated separately starting from the rows and columns of the matrix itself. College students learn how to do this for simple matrices. But the new formula differs from existing methods. “What is remarkable about this identity is that at no point do you ever actually need to know any of the entries of the matrix to work out anything,” said Tao.

The formula makes sense in hindsight, Tao said, because the eigenvalues of the minor matrix encode hidden information. But “it certainly was not something that I, for instance, would have thought about.”

It’s unusual in mathematics for a tool to appear that’s not already associated with a problem, he said. But he thinks the relationship between eigenvectors and eigenvalues is bound to matter. “It’s so pretty that I’m sure it will have some use in the near future,” he said. “Right now, we just have one application.” 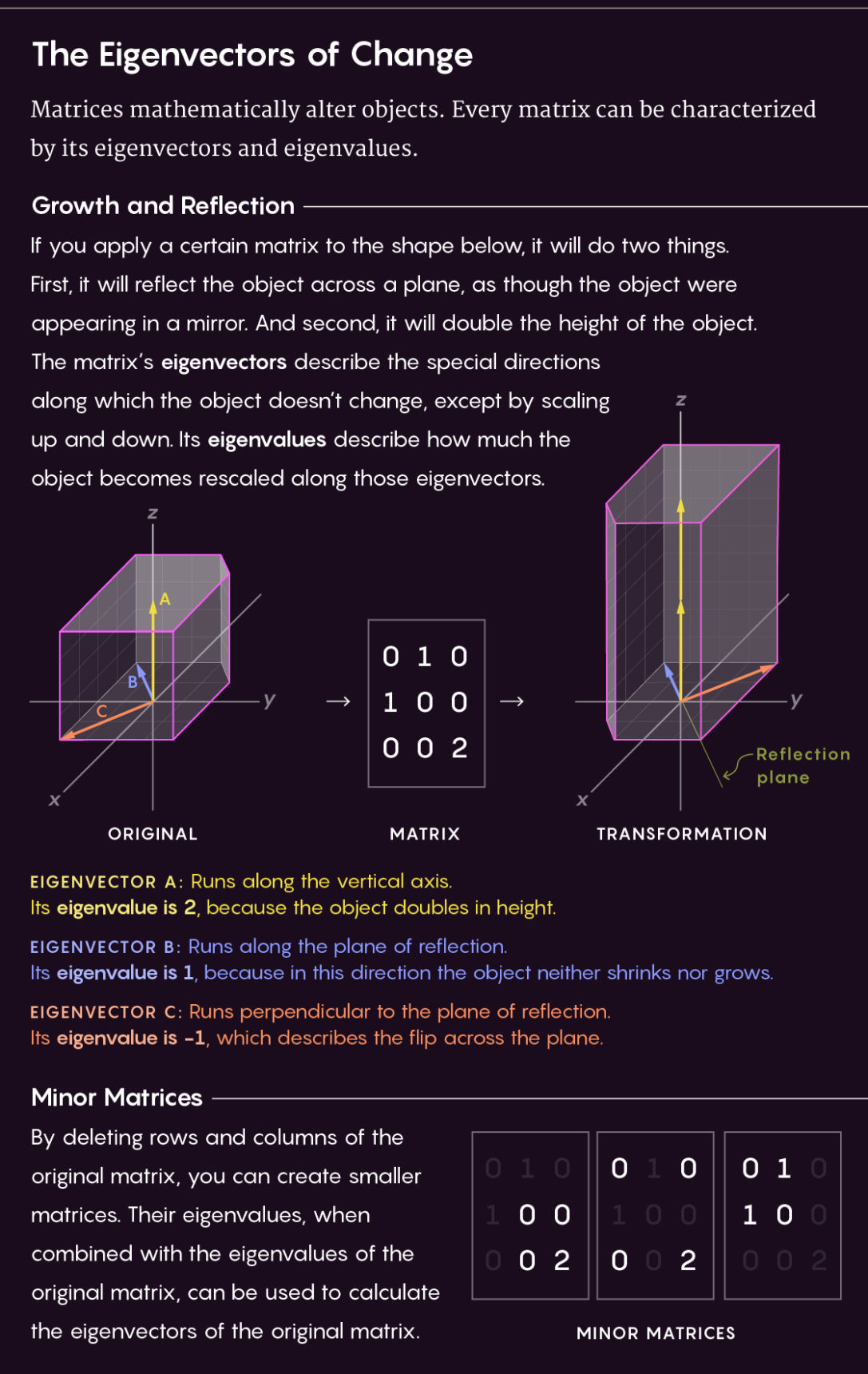 Experts say that more applications might arise, since so many problems involve calculating eigenvectors and eigenvalues. “This is of really broad applicability,” said John Beacom, a particle physicist at Ohio State University. “Who knows what doors it will open.”

Pure mathematicians feel similarly. “This is certainly both surprising and interesting,” said Van Vu, a mathematician at Yale University. “I did not suspect that one can compute eigenvectors using only information about eigenvalues.”

it’s not surprising that a new insight into centuries-old mathematical objects came from physicists. Nature has inspired mathematical thinking ever since humans started counting on 10 fingers. “For math to thrive, it has to connect to nature,” Vu said. “There is no other way.”

The expressions for the eigenvalues are simpler than those of eigenvectors, so Parke, Zhang and Denton started there. Previously, they had developed a new method to closely approximate the eigenvalues. With these in hand, they noticed that the long eigenvector expressions seen in previous works were equal to combinations of those eigenvalues. Putting the two together, “you can calculate neutrino oscillations in matter fast and simply,” Zhang said.

As for how they spotted the pattern that suggested the formula, the physicists aren’t sure. Parke said they simply noticed instances of the pattern and generalized. He admits to being good at solving puzzles. In fact, he is credited with co-discovering another important pattern in 1986 that has streamlined particle physics calculations and inspired discoveries ever since.

Still, the fact that the strange behavior of neutrinos could lead to new insights about matrices came as a shock. “People have been solving problems with linear algebra for a very, very long time,” Parke said. “I’m expecting someday to get an email from somebody that says, ‘If you look at this obscure paper by [the 19th-century mathematician] Cauchy, in the third appendix in a footnote, it’s there.’”

Thanks for this link! Yes, this does seem to be the same identity (and the author here specifically states that it has been discovered a couple times in the past but never successfully publicised to a wider audience). As far as I can tell this particular preprint was never published either – it seems for some reason that this particular identity just has a tough time trying to become known in the literature.

(It’s at times like this that I wish we had a good semantic search engine for mathematics – I am not sure how I would have discovered this preprint other than by publishing our own preprint and waiting for someone to notice the connection.)