We conceptualise originality as the degree to which a scientific discovery provides subsequent studies with unique knowledge that is not available from previous studies.

Specifically, we measure the originality of a paper based on the directed citation network between its references and the subsequent papers citing it. We demonstrate the validity of this measure using survey information. In particular, we find that the proposed measure is positively correlated with the self-assessed theoretical originality but not with the methodological originality.

We propose to measure the originality of an individual scientific papers based on its cited papers (i.e., references) and citing papers (i.e. follow-on research). We draw on subsequent papers that cite the focal paper to evaluate whether the authors of these subsequent citing papers perceive the focal paper as an original source of knowledge (Fig. 1A).

Suppose that the focal paper X cites a set of prior papers (reference set R) and is cited by a set of subsequent papers (citing set C). If X serves as a more original source of knowledge, then the citing papers (i.e., papers in citing set C) are less likely to rely on papers that are cited by X (i.e., papers in reference set R). In contrast, if X is not original but an extension of R, then C will probably also cite R together with X. In other words, we exploit the evaluation by the authors of follow-on research to measure the originality of the focal paper. 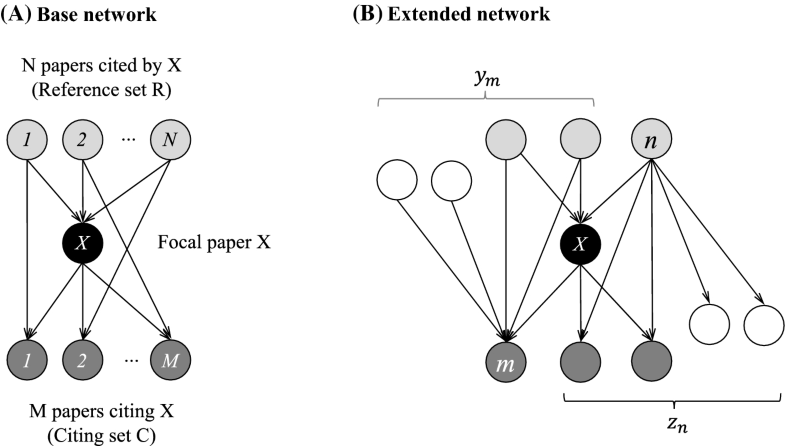 In conclusion, this study proposes a new bibliometric measure of originality. Although originality is a core value in science (Dasgupta and David 1994; Merton 1973; Stephan 1996; Storer 1966), measuring originality in a large scale has been a formidable challenge. Our proposed measure builds on the network betweenness centrality concept (Borgatti and Everett 2006; Freeman 1979) and demonstrates several favourable features as discussed above.

This entry was posted in Innovation. Bookmark the permalink.