“Crazy is a Compliment” 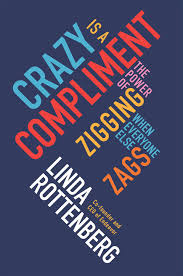 She has a wise take on the question of risk. “Pretending your job is safe and your company is stable leaves you dangerously exposed. If you think risk taking is risky, being risk averse is often riskier.”

… trying something new and being disruptive will mean challenging the status quo, group think and powerful incumbents. Then, accusations of craziness may follow. But in her experience, “almost all entrepreneurs at one point or another have been accused of being out of their minds”.

What prevents more of us branching out and taking greater commercial risk? It is what a colleague of Rottenberg calls the “pre-Bannister mistake” of self-limitation. Before Sir Roger Bannister broke the four- minute barrier for running a mile in 1954, no one thought such a feat possible. But three years later 16 runners had done it. Your dreams may be “crazy” but they may also be worth shooting for.

Experimentation is also vital. She suggests entrepreneurs should “minnovate” – take a lot of small steps.

Stand out from the crowd, Rottenberg says, and be ready to be rebuffed. “If they don’t call you crazy you aren’t thinking big enough.” But remember you have a home life, she warns, and signs off with a homely message for her daughters: “I can be an entrepreneur for a short time but I am a mommy forever.”